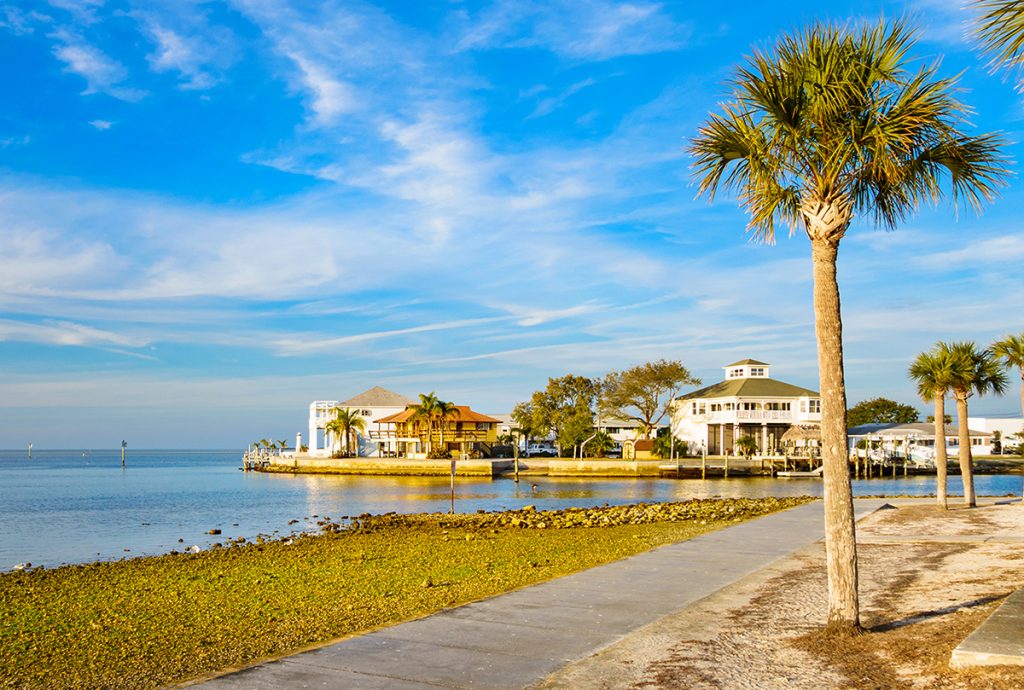 Photo of waterfront with palm trees and homes in Hudson, near New Port Richey, Florida, USA.

West Pasco County is situated along the Nature Coast of Florida over-looking the beautiful blue-green waters of the Gulf of Mexico. We are located just a short distance north of Tampa, Clearwater and St. Petersburg. Making traveling to local area attractions quick and easy.

Blanketed in Florida sunshine and flowing with neighborhood unity, each community in West Pasco holds a unique history and captivating charm.

On the northern most border of the county rests the picturesque Aripeka, a tranquil fishing village of unspoiled natural beauty where residents can enjoy fishing and boating in the village’s many inlets and bayous.

Bayonet Point – “A big rock covered with Spanish bayonets (called yucca or yaka)”, this has been said to be the inspiration behind the name. The name first appeared as a geographic feature on a 1900 map produced by the Florida State Geological Survey. In 1926, State Road 52 was built to connect U.S. 19 to Dade City which brought recognition to the small town.

The town of Elfers is a short jaunt southeast from New Port Richey. Originally the land served as an Indian hunting ground called Alafia; however in 1840, Samuel Hope surveyed the area and it is now speckled with authentic homes of old.

Neighboring Elfers is a community with a name that represents the lifestyle of its residents, Holiday. A laid back town of summertime atmosphere, Holiday caters to a wide range of housing needs with condo complexes, mobile homes and gated communities.

The town was officially given a name in the mid-1960s when directors of a local bank needed to identify it. In their dilemma, they spotted a postal sub-station located on the nearby Holiday Drive. And so, the town name came to be Holiday.

Just below Aripeka is the fast growing community of Hudson, where homes line the Gulf coast and deep – water canals that run throughout the area. Once tread upon by swashbuckling pirates and Seminole Indians, Hudson was established in 1878 when Isaac Hudson purchased 200 acres of land for a mere $1.25 an acre.

In New Port Richey, the crystal blue waters of the meandering Cotee River weave through the center of town. Incorporated in 1924, it was expected that the lovely city would become the future home site for famous stars of silent films, making the town another Hollywood.

The advent of “talkies” and the depression changed the economic direction of the city. Nonetheless, several of the buildings and homes that still remain in New Port Richey were built in the early 1900s giving the town a touch of old-fashioned charm. New Port Richey is the only city along the West Pasco coast with a downtown business district offering streetscapes and charming retail shops.

Odessa was originally situated in Pasco County alone, although today the town extends into northern Hillsborough County. Odessa was named in the 1880s by the Russian immigrant Peter A. Demens, who also named St. Petersburg and was instrumental in financing the Orange Belt Railway, which ran from Sanford to Trilby to St. Petersburg.

Odessa was first largely recognized for its Dowling Brothers’ lumber mill which was said to be one of the largest in the state in the early 20th century. But soon thereafter it was also noted for its beautiful lakes and rich soil which produced citrus groves, vegetable farms and flower gardens, and large acres of avocadoes and other tropical fruits.

Odessa had grown to be known as an area of open spaces, ranching, and horse properties. But more recently it has seen many suburban property developments as Tampa’s population expands north. Now full of beautiful homes and communities, Odessa is a beautiful, convenient place to call home.

Continuing south, Port Richey is one of the earliest settled towns on Florida’s Gulf coast and has more waterfront than any other city or town in Pasco. Nestled on the Gulf of Mexico, it was founded when Missourian Captain Aaron M. Richey anchored on an island at the mouth of The Pithlachascotee River. He was so moved by the beauty of the land that he made it a home port for his schooner.

Seven Springs, which is about two and a half miles northeast of Elfers has seven little springs all right near together. Seven Springs was reported to have one of the first tourist homes in West Pasco. In 1907, Carl Johnson moved to Seven Springs. He built a large two story home catering to tourists and had the distinction of having the first swimming pool and boathouse. There were claims that the water from the springs and wells of different kinds of mineral waters would cure and had cured sick people of numerous diseases.

The area known as Seven Springs recognized for its rich soil, well kept orange groves, and beautiful medicinal flowing springs is located on the Anclote river and is an ideal place to visit and reside.

Trinity
Trinity is a fast growing community located in West Pasco County just north of the Pinellas and Hillsborough county borders. It’s tri-county location is optimal for commuters and businesses alike. It is currently considered part of the New Port Richey area but is quickly growing into its own.

Trinity is home to the new state-of-the-art Trinity Medical Center and has great schools which make it an excellent location for families. New homes and businesses are going up everyday as commuters from all over are finding Trinty the ideal location to call home.